Motebong Lodge is situated on a site previously occupied by one of the construction teams of the main water transfer tunnel of the Lesotho Highlands Water Project. The Lejone camp as the site was called, was constructed in 1990, ahead of the start of the construction of the water transfer tunnel in 1991. The camp was necessary because, with a population of fewer than 10,000 people, Ha Lejone the village, simply had no capacity to house the hundreds of staff from the construction companies and their families. With the comfort of staff in mind, the camp accommodation is designed for maximum energy efficiency, given the harsh winter conditions. The houses are mostly north facing and are insulated to maximize passive heating. In addition, all family units are equipped with anthracite heaters to protect them against the harsh winters of the Lesotho Highlands. 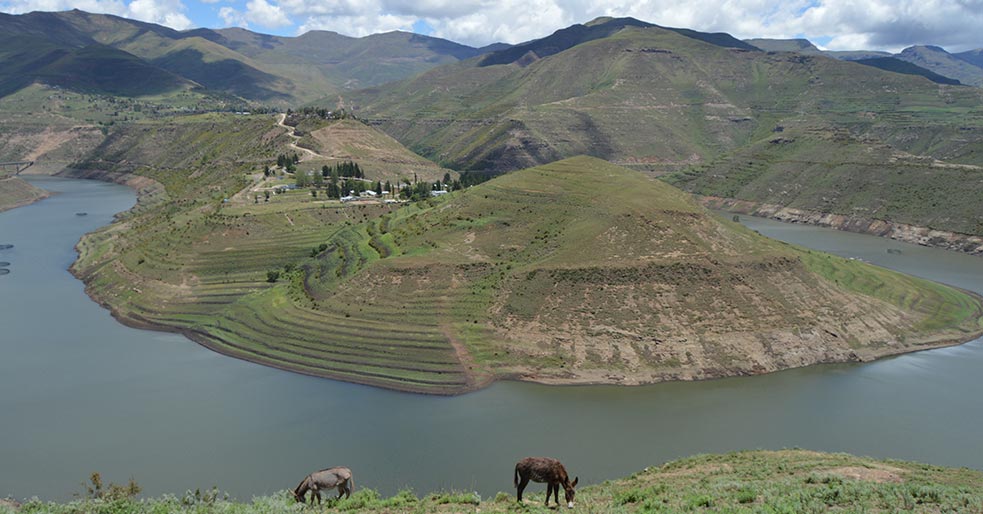 The camp was self-sufficient with a tuck-shop for essential supplies, a clinic with access to doctors and supported by a trauma unit in Hlotse 71kms away, a pre-school and a primary school on-site. Self-sufficiency in the camp was necessary as there was only one general dealer and a few smaller stores (all with a limited range of products) for Ha Lejone and surrounding villages. Even after Mafika Lisiu pass was completed and access way improved, Ha Lejone remained largely un-serviced and the terrain made regular trips to the lowlands un-attractive.

Because of the lack of proper roads in the highlands prior to the LHWP, travel was mainly by horse or by aircraft. The remote areas of Lesotho were serviced by Basutair, established in 1961 that was owned by an aviation enthusiast named Richard Southworth and was subsequently bought by the Government for M100,000 in 1969 and named Lesotho Airways.

Tales told by pilots of the flying the mountain shuttles are legendary and often hilarious! Hand luggage often consisted of items such as live chickens, pumpkins etc. and the type of luggage did not rank as either funny or unusual! In those days, it was the norm for people living in these remote areas to have travelled by aircraft before seeing, let alone riding in a motor vehicle. Apart from the Lesotho Airways service, the flying doctor medical service was the other feature in the skies of the highlands.

The Cessna was the airplane of choice until the rugged Canadian twin otter with a bigger capacity and an admirable landing and take-off capability, perfectly suited for the mountainous terrain and the tricky landing strips joined the fleet.

To date, the airports and airstrip map shows Lesotho to have the highest density of airstrips in the region. Lesotho has 33 airstrips, of which 16 are International Civil Aviation Organisation (ICAO) accredited – contrast these with 26 ICAO accredited airstrips and airports for Namibia, a much bigger country and with a bigger population and economy.

Travel into the highlands changed dramatically with the completion of the tarred road in 1990, and so did human practices. The new road featuring the Mafika Lisiu pass at 3090m allowed the transport of aggregates, concrete and other much needed construction materials and equipment for the dam project. It was only with the completion of this road that the residents of Ha Lejone and other villages saw sedans and mini-bus vehicles in their areas.

An unintended consequences of the new roads was the demise of the established general dealer businesses run by traders with access to extreme 4×4 trucks to transport their supplies – older folk still have fond memories of the old Mercedes15174×4truckandtheHaflinger4×4.

Coming over the formidable Ha Koasa pass, taking half-a-day to cover 40km. with new roads, people now travelled to experience the novelty of town shopping and wider choice of goods and services in the low lands. Equally, with greatly reduced passenger loads, Lesotho Airways gradually reduced the highlands route until scheduled flights were abandoned. By October 1996 the airline suspended all operations, leading to the company winding down in 1997.

The first residents of the camp arrived early in 1991, ahead of the start of the tunnel construction on 1st February 1991 (same time as the start of construction of Katse dam). The staff of Mott MacDonald consultants of the United Kingdom were housed in a section currently occupied by Katse Fish Farm, with the staff of The Lesotho Highlands Project Contractors (LHPC) occupying the rest of the camp.

The Tunnel boring machine TBM was used for the first time in Africa on the Katse transfer tunnel and then next on Gautrain tunnels years later.

LHPC was responsible for the 45 km water transfer south tunnel to Muella (which roughly goes below the camp) & the 15 km delivery tunnel south to the intake. LHPC comprised of Spie Batignolle (France), Balfour Beatty (UK) LTA (South Africa) Campenon Bernard (France and Ed Zublin(Germany) and Electrical and Mechanical subcontracted to the LHPC were: Neyrpic of France and SDEM of South Africa; Deutsche Babcock of RSA for steel liners for the under river-crossing; Krohne Altometer of the Netherlands for the Flow metres.

(Top;Maintenance access point into the transfer tunnel 4km from Motebong Lodge. The tunnel from the intake tower towards the Ash rive in South Africa via Muella hydropower station runs roughly below Motebong Lodge. Below, operations inside the tunnel.)

Upon completion of the tunnel in 1997, the camp lay unused until it 2007, when it was occupied by staff of Lesotho Diamond corporation (LDC) which was mining the Kao Diamond Mine. Lesotho Diamond Corporation ceased to exist during 2008. The collapse of the LDC operation allowed for the start of negotiations in December 2008 between Motebong Tourism Investment Holdings (MTIH) and Government of Lesotho (GOL), for MTIH to takeover and operate the camp as a tourist facility.

Agreement was reached between GOL and MTIH in late December 2009, allowing for the long and difficult task of the rehabilitation and conversion of the near derelict camp to a comfortable guest facility by MTIH.

The plan is to add the comforts without losing the basic construction camp character and the historical feel of the camp. We hope our guests will be comfortable, enjoy the highlands and also appreciate the history. If you are not familiar with the driving etiquette in Lesotho, please read Tips for driving in Lesotho

Motebong Lodge offers an array of activities for all of our valued guests. Located on the banks of the Katse dam, our unique location offers our guests days filled with adventure or relaxation!

Accommodation at the mountain lodge is made up of fully-furnished and fully-equipped self catering cottages of varying sizes and accommodating a varying number of people. These cottages are heated with coal or electric and gas stoves, which is critical during the winter months. They are cleaned daily by our housekeeping staff with the exception of a couple of days when the staff is also given time off

Read more about our self-catering accommodation

The Lesotho Highlands and Motebong mountain lodge offer a host of activities both within the camp and in the surrounding highlands. Although a place for rest and relaxation, those looking for some excitement, fun and games have also come to the right place. Notwithstanding this, one gets tempted to sit back, relax and do absolutely nothing

View all facilities & activities at Motebong

Motebong has committed itself to recruiting from Ha Lejone and will continue to do so where the skills and experience is there. With the exception of the Chef, all our staff are from Ha Lejone and surrounds, and have been given the necessary training for the roles they occupy at Motebong. This is a practice that Motebong will continue to pursue for as long as is possible into the future.

Over and above its products and services for its visitors, Motebong Tourism believes in Responsible Tourism. To this end it has undertaken various initiatives in and around Ha Lejone where it is based, and from where it sources its staff. All of this mentoring and efforts to support the community enterprises and individual business initiatives are done entirely at motebong lodge’s costs

More about our community initiatives